IN THE PAST FEW YEARS, the healthcare industry has seen a tremendous amount of merger and acquisition activity. Consider the following proposed corporate couplings: Anthem and Cigna, Aetna and Humana, Walgreens and Rite Aid, Centene and Fidelis, CVS and Target, Catholic Health Initiatives and Dignity Health. Some of these went through; others were scuttled due to regulatory constraints. All of these changes are driven by a desire to increase market presence, revenue, and relevancy. Some are within a channel, such as CVS’s acquisition of Target’s pharmacies and Omnicare, and Walgreens’s acquisition of Duane Reade, Boots, and some Rite Aid locations. Others are what are considered vertical integration, such as Centene’s stake in RxAdvance, or Cigna’s proposed merger with Express Scripts. Prime Therapeutics is owned by a number of Blue Cross Blue Shield plans and has a strategic alliance with Walgreens that is designed to address both retail and specialty network needs. Many of these proposals are starting to generate concern about transparency and consumer access, and the issues are rearing up in legislatures across the country.

Health plans, hospitals, pharmacies, and PBMs (pharmacy benefit managers) are all joining forces, hoping that by offering a complete continuum of services, they will be able to leverage their purchasing power and massive amounts of data into effective, efficient methods of improving care delivery and outcomes. CVS Health is likely to be a significant case study. CVS pharmacies that provide services through retail, specialty, long-term care, and mail-order channels, coupled with convenience clinics, a pharmacy benefit manager, and pending approval of the company’s deal with Aetna, access to networks of hospitals and clinics, and insurance provision, are the most significant “soup-to-nuts” example the industry has seen.

What remains to be seen is what benefits these megamergers will deliver to patients and purchasers. We all know the challenges today — cost transparency, affordability, access, quality outcomes, interoperability — and skepticism abounds as to the realistic solutions these mergers might bring. Will networks continue to narrow, offering patients fewer choices, perhaps at better costs? Will the providers in these narrower networks have the capacity to build relationships with patients and provide more optimal care? Or will increased coordination and data sharing result, delivering the desired outcomes? Another consideration: If the big payers — Aetna, Cigna, Anthem, Humana, United HealthCare — all own a PBM, what options are left for the smaller payers? Can they stay independent? Will they trust that ESI, CVS, Optum, etc., will protect their data appropriately? Anthem must be wondering how quickly it can stand up to its new PBM now that CVS, which is supposed to process claims for them when they leave Express Scripts, is intending to merge with Aetna.

And what of the new players, like Amazon, Berkshire Hathaway, and JPMorgan Chase? There’s no question that the leadership of these organizations is successful, but will that success transfer to the complex healthcare environment? Sure, Amazon can likely deliver a prescription quickly (the drone will always beat the drive-thru window). And JPMorgan Chase is familiar with electronic transactions in a highly regulated environment. Warren Buffett is, by any accounting, a brilliant businessman who has seen success across many industries. Their announcement of the formation of a new entity that would provide care for their employees sparked speculation (and some volatility in the stock market). Few details were provided, though leaving industry experts to ponder the options. Would Amazon really open a pharmacy division, and leverage its size to negotiate significant discounts from manufacturers? Would its technology be able to be applied to the complexity of healthcare transactions, with numerous code systems and vocabularies? The three companies employ about one million people; is that large enough to disrupt the status quo, or will their new partnership offer services to others?

These same questions can be asked from the perspective of independent or regional pharmacy chains. How will they differentiate themselves and remain viable in this new megamerger world? Such pharmacies are perhaps best positioned to present themselves as community providers and patient advocates, as they long have. Developing new relationships with physicians and working with payers to demonstrate the value they deliver through the care they provide will be critical to their relevance. Practicing at the top of their license and ensuring they can efficiently exchange data with physicians and payers will go a long way in ensuring survivability in this merger-manic environment.

While this recent spate of merger plans may seem new or unprecedented, it’s worth remembering the industry has seen some changes like this before. SmithKline Beecham’s (now GlaxoSmithKline) $2.3 billion purchase of Diversified Pharmaceutical Services (now Express Scripts); Lilly’s purchase of PCS (now CVS Health, formerly Caremark); and Columbia/HCA in the hospital space are just a few of the mergers that rattled the industry years ago.

But the recent activity is attracting attention. Concerns are being raised about the impact on consumers, and a rash of PBM-related legislation has been introduced around the country, including in my home state of Minnesota. Let me provide an example. How many times do pharmacists see a patient pay more for his or her medication than necessary, all because they are prohibited from telling patients about ways to save money? This probably happens multiple times a day, leaving the pharmacist frustrated and reaching for an antacid or pain reliever.

These situations are now being heard by legislators, who are introducing bills that will address some of the related activities behind these situations, whether price increases by manufacturers or contract provisions that prevent pharmacists from sharing information about less expensive alternatives.

Many states are introducing legislation, often referred to as the “No Gag Rule on Pharmacists Act” that will prohibit health insurance companies and PBMs from contractually preventing pharmacists from telling their customers about cheaper ways to buy prescription drugs.

These bills generally have bipartisan support and would allow pharmacists to tell patients when their usual and customary (cash) price is less than the co-pay determined by the patient’s insurer. This situation often arises when the prescription is for a generic drug but could also apply to therapeutic alternatives. Too many times a less-expensive alternative is available, yet patients don’t know, or aren’t comfortable enough to ask their doctor or pharmacist about this.

Pharmacies have been subject to clawbacks, when the difference between the actual cost and the co-pay is recouped by the pharmacy benefit manager. As an example, if the patient’s co-pay is $20 and the pharmacy’s cash price is $10, the PBM expects that the $20 would have been collected and will claw back the $10 difference. Multiply that $10 by hundreds of patients and thousands of pharmacies, and it’s easy to understand the motivation behind the contract language. What’s the line from Jerry Maguire — “Show me the money”?

Pharmacies need to submit the claim to determine the PBM pricing. If they then reverse the claim, not only does that take extra time and likely result in an additional transaction charge, the PBM loses the clinical data associated with that claim and can’t accurately perform drug utilization review for the member in the future.

Fifteen states have either approved (Connecticut, Georgia, Maine, North Carolina) or introduced (Arizona, California, Florida, Minnesota, Missouri, Mississippi, New Hampshire, New York, Pennsylvania, South Carolina, Virginia, Washington) legislation that would eliminate these practices. These states, and others, have introduced 80 bills this year that would impose regulations on PBMs. Included in these bills are language regarding transparency and new standards for PBM pharmacy reimbursement, customer charges, rebate revenue, and PBM limitations on pharmacist communication with customers about costs. More information can be found on the National Academy for State Health Policy website (https://nashp.org/state-legislative-action-on-pharmaceutical-prices/).

Mainstream media is watching as well. Recent articles in the Detroit Free Press, The New York Times, The Salt Lake Tribune, and the Washington Examiner, among others, have all helped to educate the public about these issues. Personally, I’ve talked with several reporters on the issue. It will be interesting to see the outcome of state and federal legislation on this and whether the attention may impact merger approval. Stay tuned! CT

Marsha K. Millonig, B.Pharm., M.B.A., is president of Catalyst Enterprises in Eagan, Minn. The firm provides consulting, research, and writing services to the healthcare industry. The author can be reached at mmillonig@catalystenterprises.net. 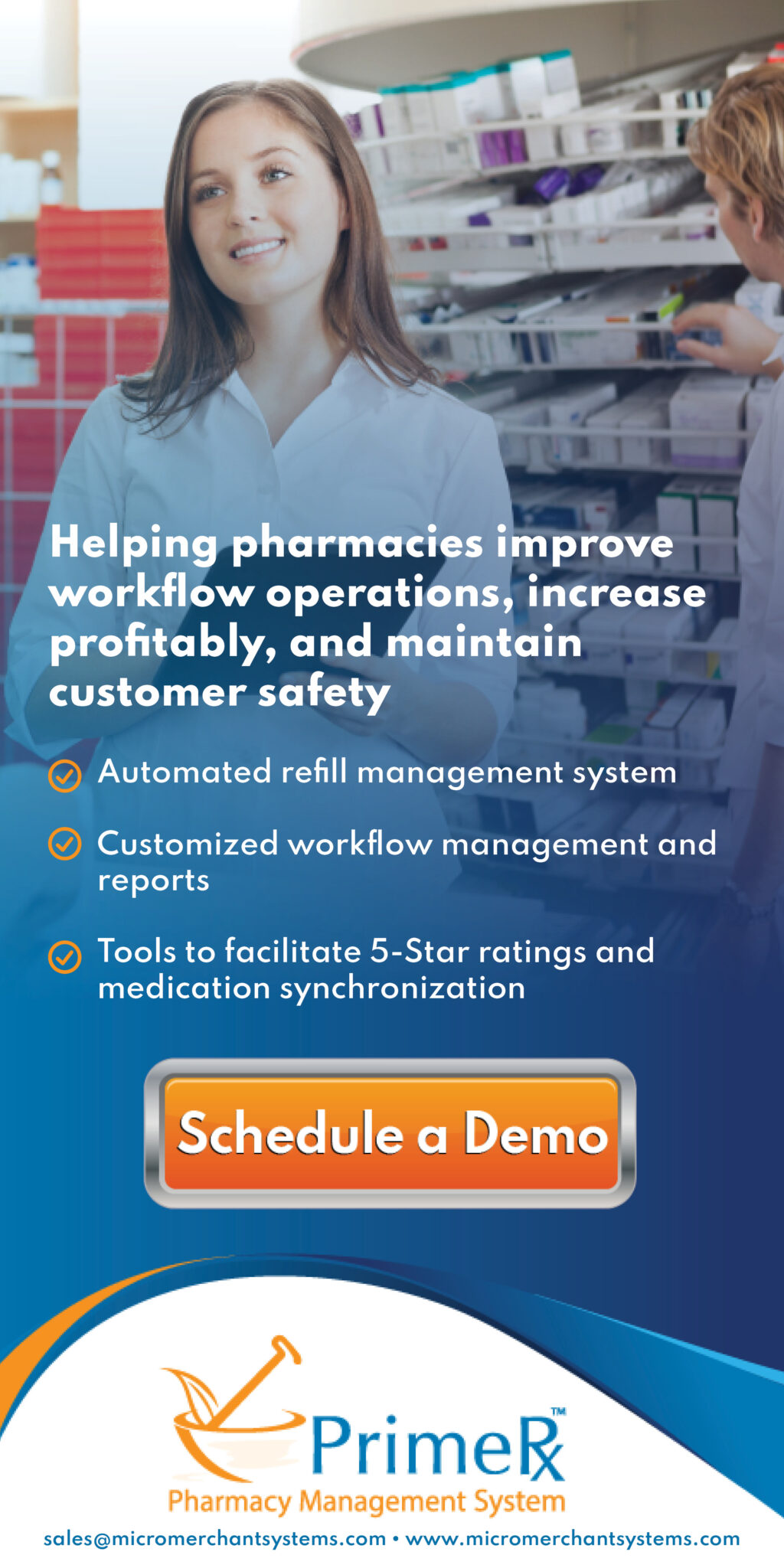 PrescribeWellness and ABM: Bridging the Gap to Medication Adherence